In the early years the team responded to local quicksand related incidents typically when called by the Coastguard. However since around 2005 we have been called out by many other agencies for work further inland. Probably the most significant being the Floods in Cockermouth in 2009 and the snows of 2013 when the entire team and vehicle fleet deployed over a number of days. So we can safely say we will respond to any call, anywhere, that our team and vehicles can be of assistance at. But our primary operating area will always be on and around Morecambe Bay, The Lake District and Lancashire in the North West of England.

We operate from 5 bases:

Flookburgh – near Grange over Sands
The Bay Search and Rescue Team has its primary base at a purpose built station at Flookburgh, at the bottom of Moor Lane (opposite West Plain Farm) near Grange Over Sands in Cumbria, where we have a central access point to any part of the Morecambe Bay as well as inland into the Lake District. One of the Hagglunds, a 4×4 response vehicle and 28ft DAF (Hagglund transporter) truck are all based here. The transporter truck allows us to deploy our Hagglund ATERV inland throughout the Lake District, Cumbria and Lancashire in our role as an official All Terrain Rescue Unit for Cumbria Fire & Rescue and Lancashire Fire & Rescue. It can also be left on standby with a Hagglund securely inside at any forward operating RV in times of extreme weather, and when unloaded can be used for team shelter from the weather!

Bolton-le-Sands, Lancashire
In July 2012 we moved Hagglund 2 into Bolton Le Sands Fire Station in a joint project with Lancashire Fire and Rescue Service to reduce response times for inland incidents such as Moorland Fire support in Lancashire and South Cumbria where BSAR may be able to assist under the MOU agreement we have in place with LFRS. A second DAF Transporter Truck is also located at this station for long range deployment.

Fleet workshop, Milnthorpe
Our Discovery 3 4×4 and a Flood Rescue boat plus Hagglund 4 are located along with our Recovery/Rescue Truck which is used as its transporter at our Fleet workshop at Junction 36 on the M6.

Arnside
In January 2013 we moved our Hagglund 3 into Penrith Fire Station in a joint project with Cumbria Fire and Rescue Service to offer a response service through the winter months for North and East Cumbria. However the space was needed for other CFRS vehicles so Hagglund 3 is now located at Arnside Fire Station with easy access to Morecambe Bay.

Milnthorpe
We have 4×4 rescue vehicle based at Milnthorpe for initial fast response to the East side of the Bay and command and control. Plus a 9 seater blue light equipped team minibus based at Milnthorpe or Bolton-le-Sands. These vehicles allow the team who live on this side of the Bay to respond quickly to calls for assistance from Cumbria and Lancashire Fire and Rescue, NW ambulance Service, First Responders and the Coastguard along the Morecambe, Silverdale, Arnside, Milnthorpe coast and for incidents inland.

Information about Morecambe Bay
Morecambe Bay is a large bay in northwest England, nearly due east of the Isle of Man and just to the south of the Lake District National Park. It is the largest expanse of intertidal mudflats and sand in the United Kingdom, covering a total area of 310km2. Towns on and near to the bay include Barrow-in-Furness, Ulverston, Grange-Over-Sands, Kendal, Arnside, Morecambe, Fleetwood and Heysham. There have been royally appointed local guides for crossing the bay for centuries. The current Queens guide is Cedric Robinson.

For long periods the Bay is without water. A barren wilderness of sand and mud, it can be stunningly beautiful on a clear day, and offers a tempting looking walk to those who know no better.

However during bad weather winds can rip across the 120 square miles of Morecambe Bay. The tidal bore roars in faster than a galloping horse, preceded by surging water that fills gullies and channels left by the
last ebbing tide.

Anyone caught out on the sands can be cut off in seconds, quicksands can suck the unwary into an unbreakable grip. Men, women, children, horses, carts, cars and tractors have all disappeared over the years

Rescue operations are as dangerous as the ever shifting sands themselves. For hundreds of years local heroes have struggled to free those trapped by the sands.All too often their efforts have been in vain.

Most treat the Sands with the respect they deserve, but there are always going to be a few who find themselves in difficulties.

When this happens Bay Search & Rescue aims to reach the main danger areas in the Bay area quickly using an all terrain, amphibious Hagglund tracked vehicle. This can go where rescue boats can’t, transporting personnel with the skills and specialist equipment to help in any emergencies.

See our links page for useful information about the bay, the weather and the tides. 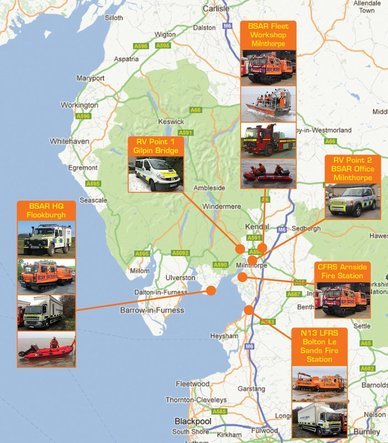 Benefactors, Trusts, Supporters and People who have generously helped the team

gulickhhc.com/drugs/erectile-dysfunction/ ert 100 blue pill how long do antibiotics stay in the body inhousepharmacy