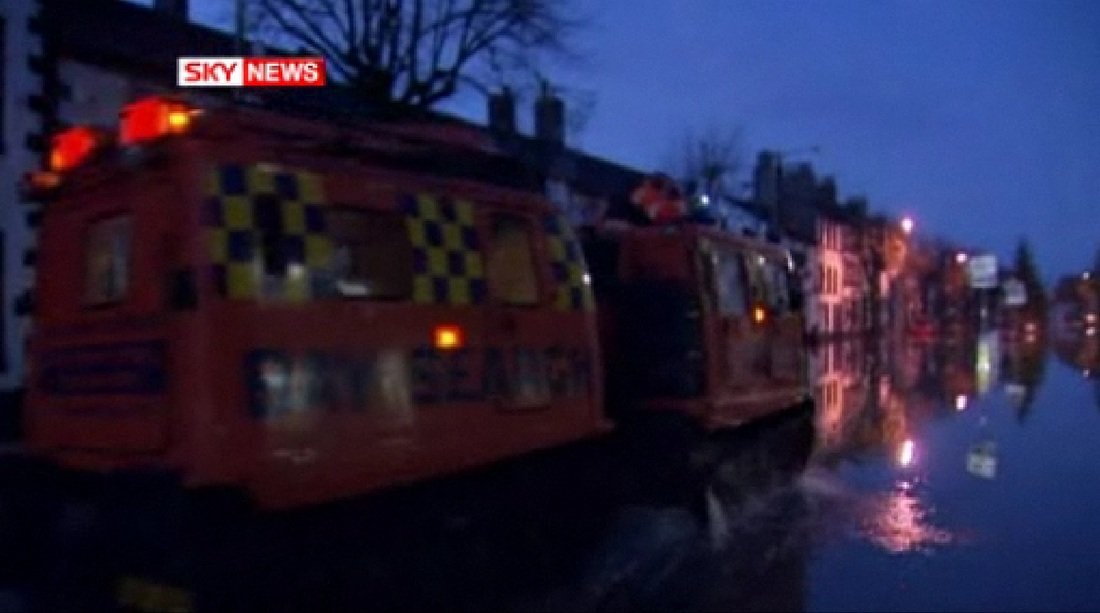 After two local callouts; one on Thursday to help look for a missing person in the Floods at Ulverston, and one early on Friday to locate a person seen in the sand gullies on Morecambe Bay, the BSAR team were called to assist in the Cockermouth floods rescue effort.

As part of our new role assisting Cumbria Fire and Rescue, the teams Hagglund ATERV (all terrain emergency response vehicle) and Landrover Ambulance was escorted under blue lights to Cockermouth on Friday afternoon where the 8 strong BSAR crew worked alongside teams from all over the UK to help evacuate residents, and provide assistance to those wishing to remain in their houses. Initially in the raging fast moving floods, powerful boats were used. Subsequently as the water levels dropped and the amount of debris increased in and below the water, boats are less useful,but vehicles still cannot be used, so the Hagglund ATERV capable of carrying 18 people in warm, dry and relative comfort was a useful asset. The crews worked from arrival Friday afternoon through to late Saturday, catching bits of sleep in the vehicles in between tasks. The Hagglund was the last vehicle operating in the towns flooded Main Street at 1.30am Friday night, and the first vehicle back in at first light mapping the flood depth and perimeters.

Subsequently both our vehicles were tasked to the ‘Gote’ area on the far side of the river which had been completely cut off apart from by rescue boat since the start of the floods. The Hagglund again was the first vehicle into the area and spent the rest of the day evacuating residents, including a medical emergency case by stretcher, and ferrying in bridge surveyors and engineers. It also recovered dozens of computers holding vital medical records for a large proportion of Cockermouth residents from the flooded medical centre. The devastation was clear to see with cars thrown everwhere and roads and walls ripped apart by the force of the water. Koi carp, obviously from garden ponds were found by the team swimming in remaining flood water on the estate. As the flood levels dropped and other rescue teams could gain careful access on foot, the BSAR team were stood down and returned to base early Saturday evening after a busy three days.

Some images of the area – in our photo gallery, and we can be seen regularly on sky news reports. If anyone has photos of the team and vehicles we would be grateful for them for our records – we were a bit too busy to take many of our own! Email us